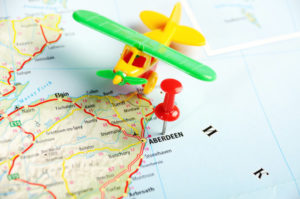 The Good the Bad and the Ugly

Planning to use Aberdeen Airport one of these fine days? Well, we created a comprehensive review of this Scottish airport to shed light on things worth knowing beforehand. In this piece, we have touched on essential aspects of Aberdeen Airport, ranging from charges to the length of waits at the baggage reclaim. Note that our reviews are based on the current situation at the airport and some claims by the people in charge of the future developments to solve the trending issues.

Being one of the largest airports in Scotland, Aberdeen Airport has been rated one of the worst airports for the fourth year in a row. This implies that despite having a bad record for more than three years, little has been done by the management of the airport to remove the bad image. Maybe the efforts are not significant enough to drag the name to the positive side compared to other airports. However, it is worth noting that while the airport might not have too much of luck in rating, it has incredible aspects which are equally worth mentioning, and we have done that in this review.

The Good things about Aberdeen Airport

Aberdeen Airport is located in the serene parts of the Aberdeen City of Scotland. Just recently, the management announced that it is looking to expand the airport and make it one of the best international gateways in northeast Scotland. This is seen as a significant project that would completely change the image of Aberdeen Airport, being that it will touch on the critical aspects of the airport. Fortunately, the city councillors had looked into the project plan and provided the go-ahead. The strategy is focused on expanding the major runway and the international arrival halls.

The airport is looking to introduce body scanners at the airport as a way to beef up security. This comes after complaints by the travellers who felt the management was not doing enough to ensure safety at the Aberdeen Airport. Though security scanners were introduced back in 2010, the department in charge of security announced that there would be no other scanning methods to be used on travellers selected for scanning. The fact that there has been a low refusal rate of scanning experienced from clients makes the introduction of body scanners a valid decision, though it was initially seen as a huge burden on the airport. Therefore, if you are looking for an airport in Scotland with a fair level security level, then you might consider using Aberdeen Airport.

There is an introduction of new Dixons and Boots Travel Stores, which is seen as a major boost to the airport. Both stores are large and spacious enough to offer enough room for the baggage. They will encompass unprecedented brands at the airport. Dixon started to operate in April, while the entire project was set for completion this year. The expectation of many clients inspired the introduction of the two large stores due to the expansion of the terminus. It can be seen that Aberdeen Airport Management is looking to provide solutions that travellers have waited for in a long time. The advanced long stay car park booking system has also been complimented by many users. Click and Drive car hire also allows you to search and book online to find the best prices on car rentals at the airport.

The Bad things about Aberdeen Airport

Recently, Aberdeen Airport doubled its drop off charges to £2, and this received massive negative reactions from the clients’ side. In the previous year, the drop off fees was only £1. Also, the drivers have up to 15 minutes to do the dropping and clear the way for more passengers to come in. If they spend anything more than 15 minutes, there are repercussions.

Some clients reported that this would only cause inconvenience on their side since the charges are extended to them in case, they spend more time to find their way out within ten minutes. Instead, management should come up with a better way to alert the drivers of the landing planes so that they know when to drive in and pick up their clients as soon as they arrive. Also, the charges should be revised as they might give a bad name to Aberdeen Airport.

When asked why they felt Aberdeen Airport is not good enough, some passengers cited lack of enough seats, a limited range of food outlets and shops around the place. Therefore, based on this, the airport was given a score of one star. For sure, the company should work on providing convenience to passengers who are looking to have a good time at the airport. Though the management claimed it was in the process of expanding the runway and making a major improvement, the passengers were angry at the current situation, marking that they were unsure of the future improvements.

Aberdeen Airport has received a lot of criticism in the past years. Indeed, the company was not working hard enough to meet the expectations of the clients. The long waits at the baggage reclaim and lacks enough stores were some of the significant issues. Though the airport is working to rid the bad image it has been given; there is a lot of work to be done. If the expansion project, which is almost complete, shall be complete and functional, it is believed that Aberdeen Airport shall receive praises and the bad name shall somehow fade. Until then, the best thing to enjoy at the airport in the current time is excellent levels of security, friendly customer care, and enough spacious stores.