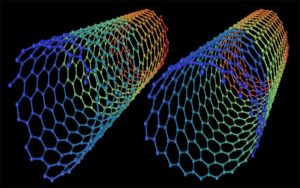 What are Carbon Nanotubes

Carbon Nanotubes were discovered in 1991 and are composed of carbon atoms that are linked in hexagonal shapes with each atom covalently bonded with three carbon atoms. Whereas buckyballs are round in shape carbon nanotubes are cylindrical.

Carbon Nanotubes or CNTs have been used in many applications which include electric motors and even antennas for radios.

These have been used as additives for oil which resulted in reduced friction coefficients and hence reduced wear rates. CNTs have also been used as solid lubricants with lubricant powder additives used to test the tribological properties, and with the recent developments of nanotechnology this further opens up many more applications.

This technology is being used to help lower energy consumption and CO2 emissions by reducing friction and wear in engines. It is used for cylinder liners and piston rings to reduce the friction which then reduces emissions as less power is lost in the engine. They are also used for bearings to reduce the coefficient of friction which again increases the efficiency of the engines.

The application of this technology has been applied in both spray format and dip coatings.

There are many other applications for carbon nanotubes which range from clothing through to x ray machines.

The applications are only limited by peoples imagination.